So, this great new subscription box has been released containing a combination of healthy snacks, natural bath and beauty products and other unique items to keep you ‘dreaming on Cloud9‘. These items are supposed to keep you feeling joyous, relaxed, and  happy, thus called the Cloud 9 Sample Box!

And so, begins the unpacking! This cute little orange box arrived via priority mail in perfect condition. Once I popped it open, I saw a cute little note stuck to the inside of the lid with stickers. 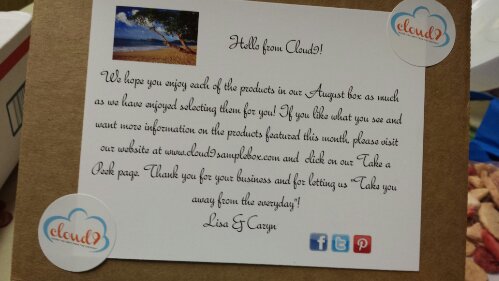 Then, on top of everything was an info card with the details on all the products included in the box and their website links/some discount codes.

So first up, we have a jar of Lisa Ann Skincare Coconut Lime Body Butter. I immediately unscrewed the top and smelled it, and felt as though I was sipping on a tropical drink in the bahamas. It has a nice texture: not too thick or sticky, but goes on easy and keeps your skin feeling smooth.  I believe this is a full-sized product (or at least big enough for me to consider that) which is definitely a perk.

Now, onto the oils!

I recieved 3 sample packets of oil in this months box: 1 Kelapo Coconut Oil, which I have already used while making some awesome protein pancakes. Surprisingly, Kelapo must either be a popular brand or a new brand trying to get its name out there, because it also arrived in my August BuluBox Weight Loss Box (review up soon!).

I also got 2 packets of California Olive Oil, which is a great extra virgin oil that can be used for cooking, making salad dressing, or, as a smoother for dried/ripped cuticles. 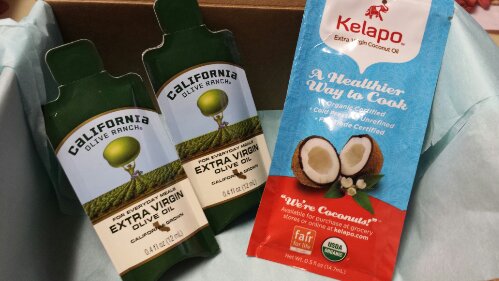 This is a brand I’ve never heard of before- Jaxn’s Twice Baked Potato Sticks. In my mind, I suddently think of those greasy potato sticks I used to eat when I was a kid, either coming in individual packs or a big round tin. However, these are apparently supposed to be healthier and better for you, weighing in at 160 calories per serving, 19g carbs, super low sugar. I personally can’t see myself going out and purchasing bags of them, but definitely will enjoy this sample bag!

Next to the sticks is a packet of CharCrust Orginal Hickory Grilled spice rub. I’m not much of a griller myself, however I could imagine either rubbing some chicken breast with this and baking it in the over, or passing it over to my Dad to try out.

Finally, we have some sweets:

There was a bright blue bag of Geraldine’s Bodacious Key Lime Cookies, which are all-natural tangy-sweet cookies. I actually recieved a similar style cookie in my Juniper Box a few months ago, and thought they were great! You usually expect a chocolate chip or peanut butter cookie, so this was a new refreshing twist (and also went with the theme of the key lime coconut body butter!)

I recieved a few creamed honey sticks! These three sticks were wrapped up together with a ribbon and came in the flavors cinnamon and lemon. I’ve never had creamed honey before (I’ve had honey sticks, however, which can be seen in my past Juniper and Taste Trunk boxes) and so I was excited to get these. I think I’ll test out the cinnamon flavor with a chai tea, and lemon with a green tea… or perhaps use them in one of my next baking adventures. 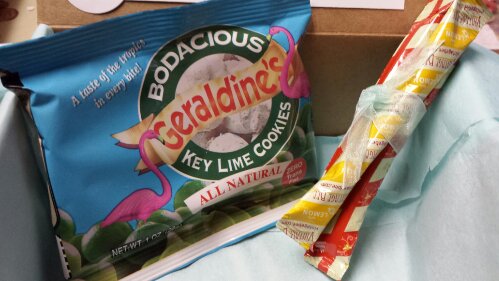 In general, I was pretty happy with my first Cloud9 Box. I was happy to find out that it was not ‘just a food box’ and not ‘just a bath and body box’ but combined the best of all worlds to keep you feeling happy and relaxed. I like how they had somewhat of a theme going on with the Key Lime  Cookies, Lime Coconut Body Butter and Coconut Oil, and which that they kept up with that, perhaps adding in some powdered margarita drink mix, or macadamia lemon balls, etc. It could have been called their “August Tropical Vacation Escape” box or something clever!

Would I recommend the Cloud9 Box? Definitely. It seems like they try to cater to many crowds, as they tried to pick some items that were comforting and some that were healthier options. How much does it cost? The box costs only $15 plus $5.95 for shipping and handling. In general, I would nix the BBQ seasoning and instead throw in a lip balm, or to stick with the food-theme, a pink himalyan sea salt sample packet. However, I was very happy with all of the other items: I’ve already used the coconut oil, brought the honey sticks to work today and know I’ll be using that body butter when my hands get dry!

*I recieved this complimentary box for reviewing purposes*